25 years ago Patricia Thorndike married into a Dominican family that lived in extreme poverty. Several family members had lost their lives to diseases that money and access to proper health care could have cured. She saw her husband’s family home taken away by a hurricane.
Since that time she has been passionate about alleviating extreme poverty in the Dominican Republic. She met many families and Dominican and Haitian mothers who want jobs, want safe, healthy and educated children. Unfortunately these mothers are often not able to keep their children safe, healthy and in school because of the obstacles that keep poor people poor. No other segment of society on earth faces as much exploitation and injustice as poor women, except for poor girls.
She realised that investing in the education, health and empowerment of a girl today means she will have the tools to make smart choices that will better the lives of her children in the future. She will reinvest 90% of her income back into her family and her community, making her the most influential figure in today’s world.
In the fall of 2012, the Mariposa DR Foundation purchased a large piece of property in the town of Cabarete that was formerly a private school. It had been vacant for two years, was run-down and needed extensive repairs. With the help of volunteers and donations (mostly from the US) the entire area was transformed into a beautiful facility where impoverished Haitian and Dominican girls come to engage in sports, receive academic tutoring, have access to libraries and computers, receive job and life skills training and health and wellness care. For the girls, having their own space allows them to develop healthy relationships with mentors and other girls in the community, and feel empowered to make a difference in their lives and their communities.
When they began the girls group in January 2010, the pilot group of 15 girls were chosen by the founders based on previous work they had done in the community. From there it grew organically – as the girls began to attend regularly, they would bring their sisters, cousins and neighbours. They then realized that this was the best way to expand the enrollment. Siblings, cousins, neighbours and friends of girls who are already enrolled are grandfathered in as numbers slowly increase. Of the more than 100 girls, there are probably only about 35 families.
When I was in Cabarete this summer, the girls in their familiar Mariposa T-shirts were everywhere, most of them between 7 and 16 years old. You could find them playing on the beach, talking to the local and foreign business owners, having a kite board set up for them at a local kite school (at Mariposa girls learn rescue techniques, but also windsurfing and kiteboarding). They were friendly and polite, with happy smiles (“who wouldn’t be, living in this paradise ?”  my youngest daughter reacted ;).
However, most tourists do never visit the villages where they live, a little inland from the beach and the hotels. Houses made of wood with zinc roofs, mostly consisting of one single room, painted in bright colours, with dirt roads and colmados (tiny local grocery stores). The villages look excactly the same as they did 16 years ago, the last time I was there.
That is why I strongly believe in this project and in the idea that the only way to stop generational poverty is empowering girls, giving them all the tools in life so that they can change the fate of their own future families.
The Foundations also runs a couple of satellite projects. More info on their website.
www.mariposadrfoundation.org 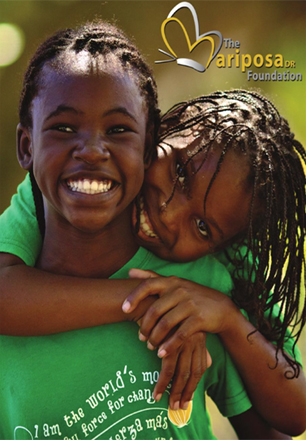